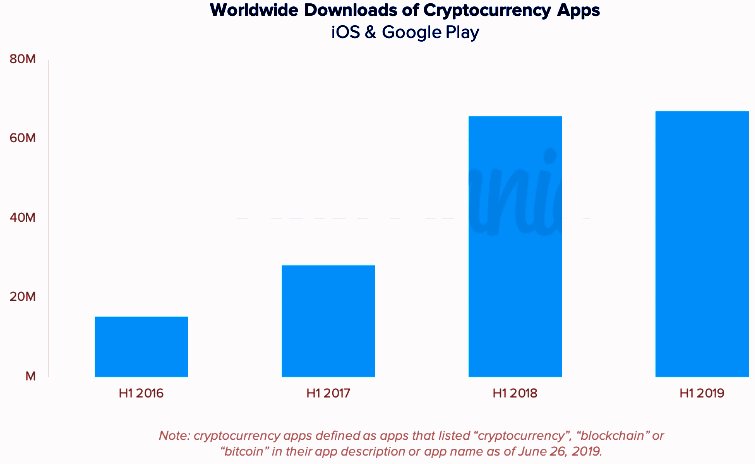 2019 has so far been an amazing year for cryptocurrency. According to recent stats, there are now over 6,500 cryptocurrency apps across iOS and Google Play at the end of Q2, 2019. This is an increase of 35% since January 2018.

There have been 67 million downloads of cryptocurrency applications so far in 2019 alone. Research shows that demand is still high largely driven by the mobile and finance ecosystem.

Emerging markets are seeing the highest growth rates of finance apps, with some markets seeing a 400% growth in app downloads since 2016. This has largely been attributed to demand for banking and fintech apps that democratize finance services like investing, money transfers, consumer loans, and microloans as alternatives to credit cards.

Fintech apps are particularly interesting because they carve out large user bases and foster habit-forming behaviors. Mobile fintech apps tend to be quite sticky, with average users checking them nearly daily. Daily usage was up 35% in 2018 since 2016. Below are some of the 2018 mobile stats that show why mobile is fueling this industry:

$ETH Staking Hits All Time High Ahead of Merge

With this background, we can now appreciate why cryptocurrency apps have been on the rise year-on-year since 2016.

In Kenya, a few businesses are already accepting crypto payments. The trend is likely to continue as conversation around digital currencies continue with the most recent coming from top regulatory and industry thought leaders across Africa spurring the debate further.