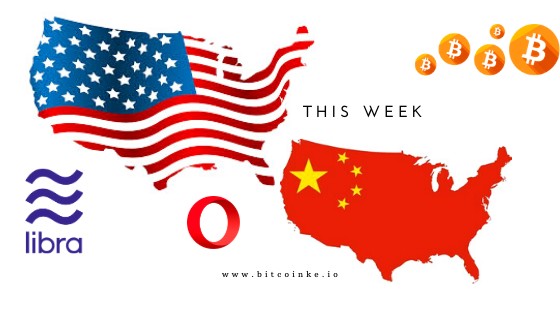 This week in blockchain and crypto seems to have had several highlights as governments and the crypto space dominated news outlets throughout the week. The week has seen discussions on digital currencies by governments continue which has influenced price hikes in the crypto space.

Facebook CEO, Mark Zuckerberg, has his first Libra Hearing grilling by U.S. House Financial Services Committee this week where he discussed the role of Facebook on the independent Libra Association. Zuckerberg fielded pointed questions on controversial issues around the social network and its proposed cryptocurrency. Specifically, Zuckerberg reiterated his commitment to satisfying regulator concerns saying that his company, Facebook, would quit the Libra Association of digital currency was launched prematurely without regulator approval.

Following the Libra hearing, President Xi Jinping of China called for the country to accelerate its adoption of blockchain technologies. Soon thereafter, the Standing Committee of the 13th National People’s Congress in China passed a new law regulating cryptography that will take effect on Janurary 1st, 2020. The new regulatory framework sets the standards for application of cryptography and management of passwords.

Following these pronouncements, it was no surprise to see Bitcoin prices soared 42% to a high of $10, 500 at one time. This marked the biggest daily gain that Bitcoin has had since 2011 proving that the entrance of governments into the space will have a dramatic effect on the crypto market. The new price surge has also been seen as the end of the bear market and the beginning of another bull run.

The release of new Bitcoin data this week has also shown just how extensive the crypto space has grown in recent years. The 18 millionth bitcoin has been mined further shrinking the remaining 3 million bitcoin pie. In addition, recent data shows that the number of Americans owning crypto has almost doubled in 2019 while 32% pf Europeans surveyed believe that crypto is the future of online payments. Another recent study has also shown that Bitcoin has so far transferred $11 trillion in wealth since it went live in 2009. This new study revealed that Bitcoin has managed to compete with payment system industry leaders in just 10 years and is expected to overtake fiat payment heavyweights by 2029.

This week saw another major milestone as Opera, one of the top 5 browsers worldwide, became the first browser to integrate a digital wallet. The enhanced crypto functionality is expected to let Opera for Android users make Bitcoin payments directly from its built-in digital wallet and interact with decentralized apps(DApps) on the TRON blockchain

Sign Up for the upcoming Bitcoin / Crypto Course to learn how to trade and earn from bitcoin and other cryptocurrencies.