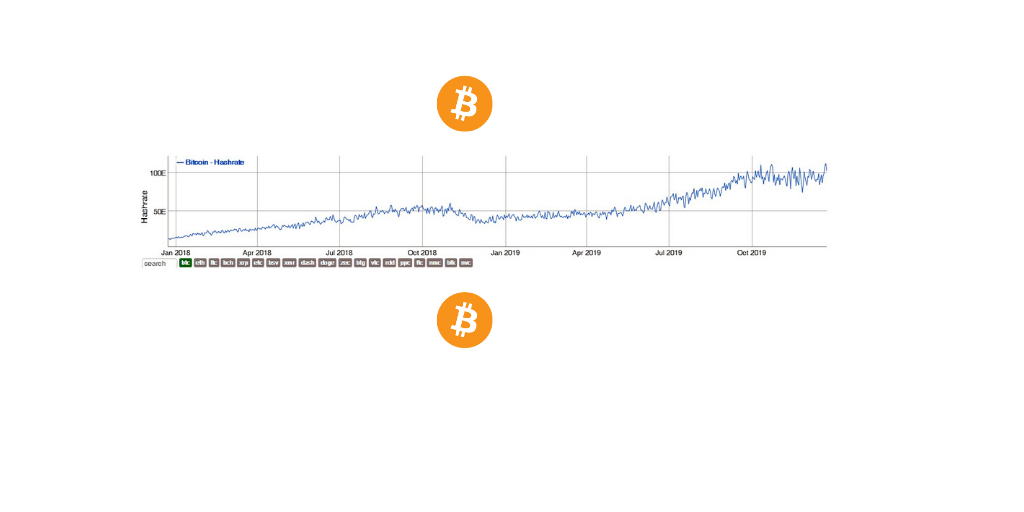 The bitcoin hash rate is the processing power of the bitcoin network. The higher the hash rate, the more secure and robust the network is against an attacker.

Here are a few stats about the bitcoin hash rate:

ALSO READ: Bitcoin was the Best Investment of the Decade, Says Bank of America Securities Report

The rising hash rate also means that bitcoin strength and dominance of the overall crypto market will continue to rise. 2019 has seen bitcoin dominance go from just 51% in January to about 69%  by December 2019. According to experts, 2020 is likely to see bitcoin dominance go even higher with speculation putting it at 85% dominance in 2020 along and at 98% by the end of the decade.

If the above predictions and hash rate continues to rise, then it could spell doom for many altcoins. Bitcoin strengthening its market position would echo gains it secured this year. Bitcoin hash rate growth in the last 2 years since December 2017 now stands at 800%.

No altcoin has this kind of hash rate growth. As a result, this growth is predicted to destroy the utility of competitors, specifically Ethereum, EOS, and Cardano.

In light of these developments, Ripple CEO, Brad Garlinghouse, has made a bold prediction:

“The world doesn’t need 2000+ digital assets. While I don’t think there will be one coin to rule them all, it’s clear that if an asset doesn’t have a proven use case beyond speculation, it is not going to survive.

I have said publicly before that I think 99% of all crypto probably goes to zero.

But there is that 1% that I think is focused on solving a real problem for real customers and is able to do that at scale.”

Investment Opportunities, Risk Management, and Market Liquidity – Which Crypto Exchange Can You Trust?

The increased hash rate and bitcoin liquid sidechain product, already getting support from big exchanges like BitMEX and Bitfinex, is expected to put a squeeze on altcoins, impacting their popularity, liqudity, and investor sentiments essentially wiping out a vast majority of altcoins.