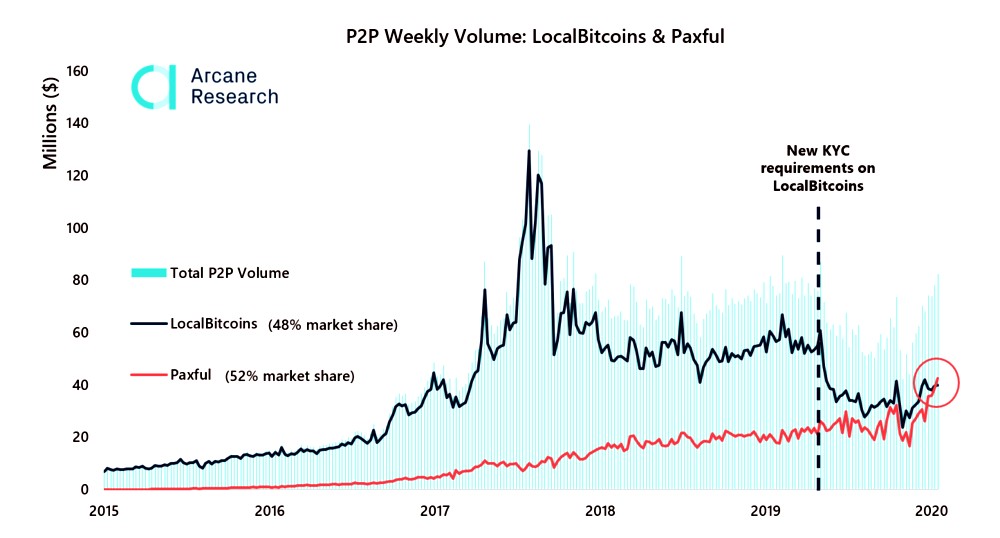 For the first time in bitcoin history this week, the P2P bitcoin marketplace has seen a shift in market share with Paxful now becoming the dominant platform globally.

Once the domain of LocalBitcoins, the peer-to-peer bitcoin marketplace has seen the once hugely successful platform now lose marketshare to Paxful, five years since its inception.

45% of Paxful crypto wallets are in Africa.

According to statistics shared by Arcane Research, the tipping point seem to be sometime in 2019 when new KYC requirements on LocalBitcoins took effect.

Following this, BitcoinKE reported on the quiet removal of in-personal cash trades option and cancellation of fiat trades without warning, forcing local traders to look for alternatives. Paxful, on the other hand, were happy to onboard the new users onto its platform.

LocalBitcoins is now Remote Bitcoins. They took down all their cash offers and the refugees are flooding to @paxful VIP support for all Cash vendors! We won’t let you down. Cash is still king in the emerging world!

From the graph, it is clear that LocalBitcoins experienced a huge deep in total P2P bitcoin volumes being traded on the platform.

On the other hand, Paxful’s growth continued unabated, with the company recently announcing a 116% growth in March 2020 vs. March 2019 trading volumes amid the Covid-19 pandemic.

A recent report by Arcane also revealed that the young and mobile-native African continent are contributing to the huge growth in P2P bitcoin marketplace, with Africa now becoming the second-largest continent in P2P trading volumes after North America globally.