The collapse of FTX led to $9 billion in realized losses for investors. This pales in comparison to the $20.5 billion lost following the de-pegging of Terra’s $UST token, and the $33 billion lost after Celsius and 3AC collapse. 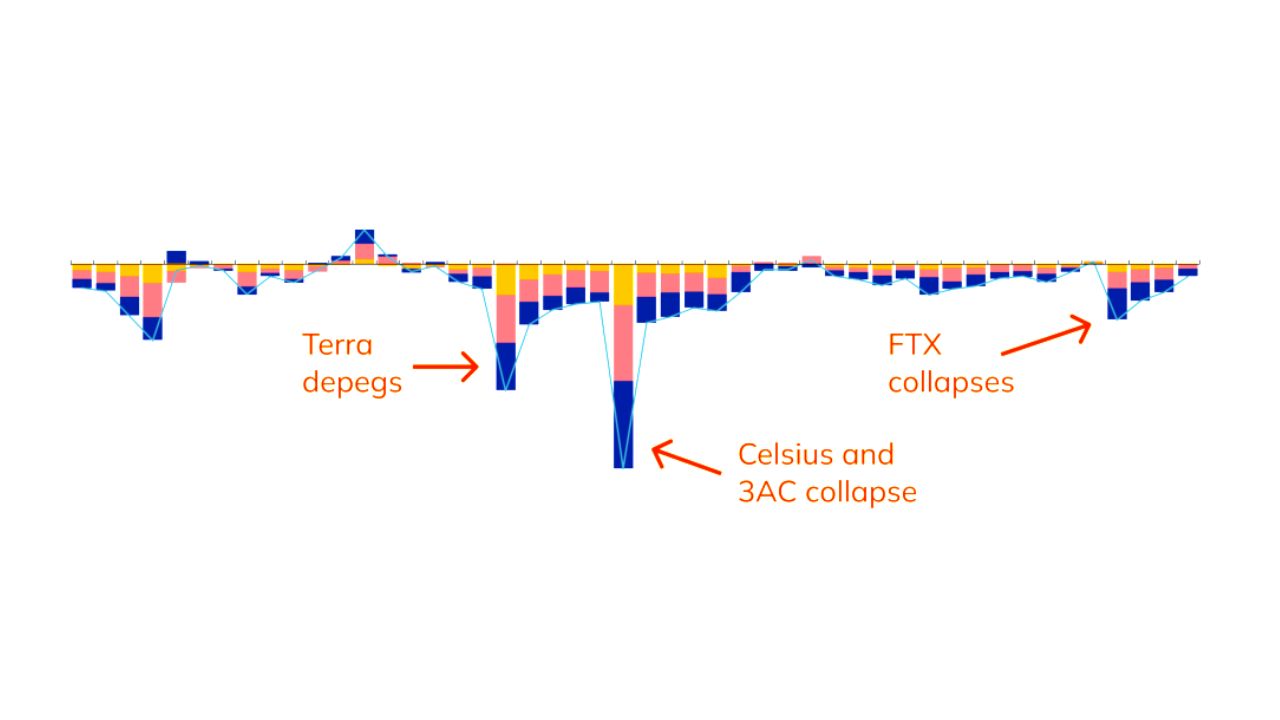 The recent collapse of FTX, one of the largest and most prominent crypto companies, was not as bad for crypto investors when compared to previous collapses in a tumultuous year for crypto.

According to an a report by blockchain analysis firm, Chainalysis, the collapse of FTX led to $9 billion in realized losses for investors. This pales in comparison to the $20.5 billion lost following the de-pegging of Terra’s $UST token, and the $33 billion lost after Celsius and 3AC collapsed a few weeks later.

This is illustrated by the chart below showing realized profit of crypto sent per week:

The chart indicates assets that were driving losses in every week of 2022 including BTC, ETH, and stablecoins — all color-coded.

“From a market-wide point of view, the data above suggests that, as of now, the heaviest-hitting crypto events of 2022 were already behind investors by the time the FTX debacle took place.” –  Chainalysis

Chainalysis calculated realized gains and/or losses by measuring the value of each wallet’s assets at the time they were acquired, minus the value of any portion of those assets sent to another wallet during the time period studied, while also accounting for pricing differences at different times the assets were acquired.

The collapse of FTX still drove down crypto prices even if such collapses were found to have less of an impact on market prices. While all three scenarios had some impact on crypto prices, Chainalysis previously indicated that the market downturn is more closely tied to the stock market downturn, in particular tech stocks.

According to Chainalysis, the cryptocurrency market has become more correlated with stock indices unlike in the past when there were only ‘waves’ of correlation and crypto assets were a safe haven during market declines. Bitcoin has maintained significant price correlations with the NASDAQ-100 Technology Sector index (NDXT) and SPY which tracks the S&P 500 stock market index this year while remaining uncorrelated with GLD. So, when NDXT and SPY began to fall, Bitcoin followed suit.

Terra’s depeg still accelerated the drop in crypto prices for a few days, Chainalsyis said. Still, the accelerated decline ended around May 13 2022 at roughly the close of UST’s collapse at which point Bitcoin’s price action fell back in line with non-crypto tech assets.