Once a golden boy of the crypto industry, Mr. Bankman-Fried has seen his vast business and political empire collapse with stunning speed and his personal fortune has dwindled to virtually nothing. 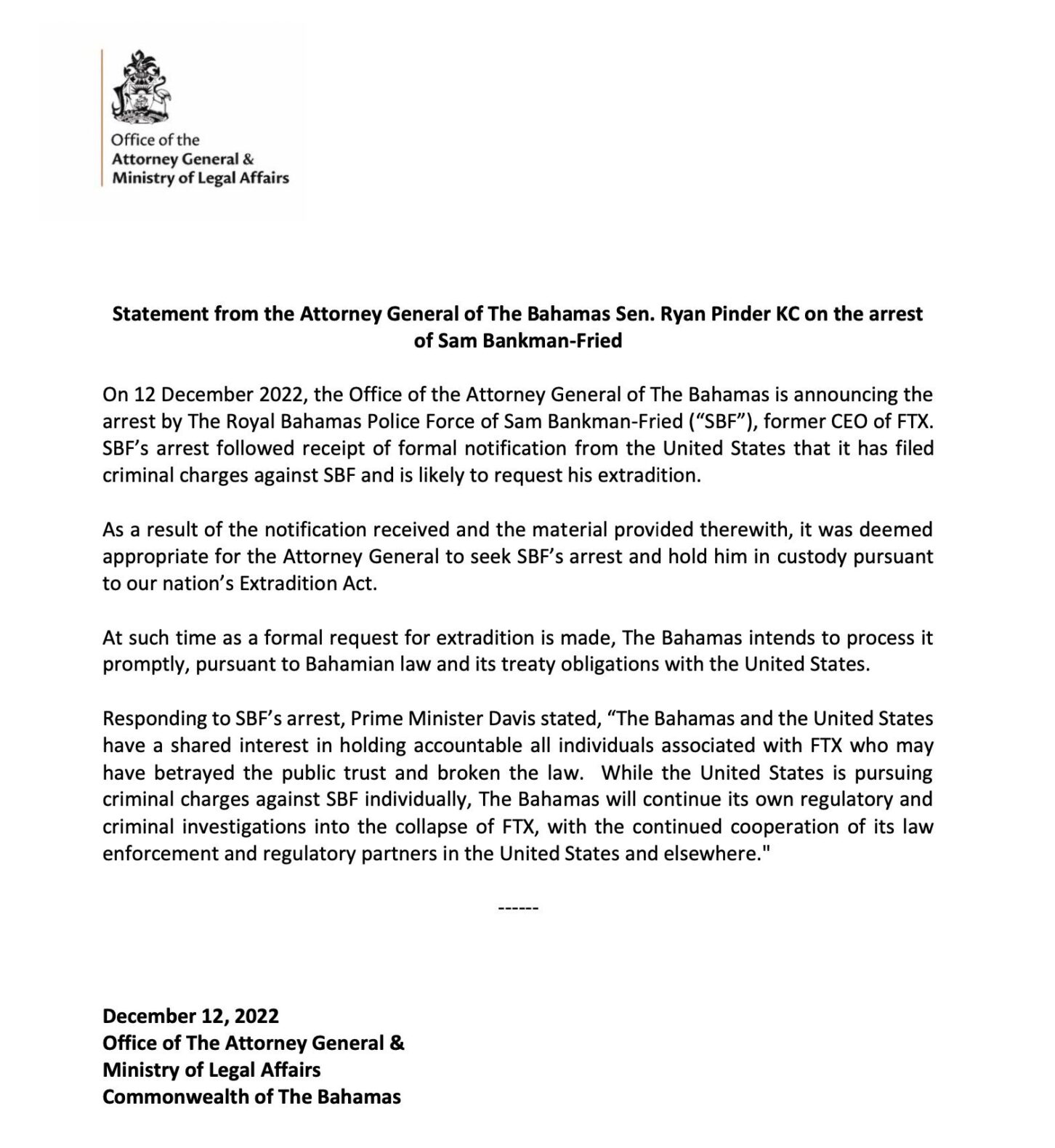 Sam Bankman-Fried, the CEO and Founder of the now defunct crypto exchange, FTX, has been arrested in the Bahamas, where he resides and where FTX was resident following an arrest warrant request from the United States.

Prosecutors for the Southern District of New York confirmed that Mr. Bankman-Fried had been charged and said an indictment would be unsealed on December 13 2022. Separately, the Securities and Exchange Commission said in a statement that it had authorized charges “relating to Mr. Bankman-Fried’s violations of our securities laws.”

USA Damian Williams: Earlier this evening, Bahamian authorities arrested Samuel Bankman-Fried at the request of the U.S. Government, based on a sealed indictment filed by the SDNY. We expect to move to unseal the indictment in the morning and will have more to say at that time.

The arrest is likely to be followed with an extradition to the United States where Bankman is expected to face charges for loss of United States customer funds. The arrest comes just one day before Bankman was set to testify before Congress.

According to the Bahamian Government:

“The Bahamas and the United States have a shared interest in holding accountable all individuals associated with FTX who may have betrayed the public trust and broken the law. While the United States is pursuing criminal charges against SBF individually, The Bahamas will continue its own regulatory and criminal investigations into the collapse of FTX, with th econtinued cooperation of its law enforcement and regulatory partners in the United Sates and elsewhere.”

According to a New York Times report, Bankman faces the following charges after extradition:

The timing of when Mr. Bankman-Fried might be moved to the United States is still unclear. While the Bahamas has an extradition treaty with the United States, the process can take weeks, and sometimes far longer if a criminal defendant contests it.

Once a golden boy of the crypto industry and a major donor to the Democratic Party, Mr. Bankman-Fried has seen his vast business and political empire collapse with stunning speed. His exchange filed for bankruptcy last month, and his personal fortune has dwindled to virtually nothing. While he used to be hailed as a modern-day John Pierpont Morgan, he’s now more often likened to Bernie Madoff, who orchestrated the largest Ponzi scheme in history.