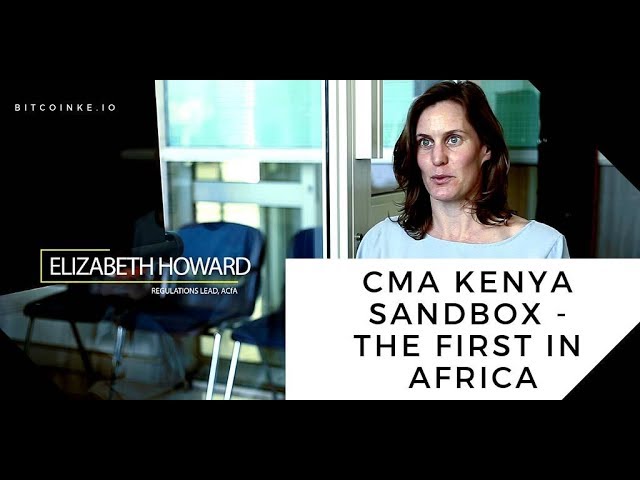 The Capital Markets Authority of Kenya is one of the most outstanding capital markets regulator in Africa largely for being the first regulator to implement a sandbox in Africa.

Speaking during an interview with BitcoinKE, Elizabeth Howard, regulations lead and co-founder of African Crowdfunding Association, one of the organizations that consulted and advised CMA Kenya on the sandbox:

“On a scale of one to ten, I’d give CMA Kenya a resounding ten relative to other experiences we’ve had with other African regulators. This is because they’re the first regulator in Africa to actually create a sandbox and to get this far in the process.

On the consultative discussions and forums, she added:

“The engagement with stakeholders has also been better than what we’ve seen in other countries. It has taken sometime, but this didn’t have to be a priority for a regulator who’s developing other aspects of the capital markets.” Howard commended the CMA Kenya team for the hard work and willingness to learn during the process.

She also noted that CMA’s jurisdiction is limited to what it can do. Through MoUs and conversations with other regulators, the authority may however be limited considering sandbox parameters in the fintech space will sometimes be 60 percent CMA and 40 percent CBK.

Cross-border collaboration was also a concern where a lack of MoUs between the different East African countries would limit what can be done. As much as the sandbox would be limited in operating in the region, its establishment is a good first step in helping de-risk fintech models being sandbox and possibly allow conversations with other regulators.

All in all, it was commendable to learn of the dedication that was put in coming up with the Kenyan fintech sandbox from a third party and what we can expect moving forward.