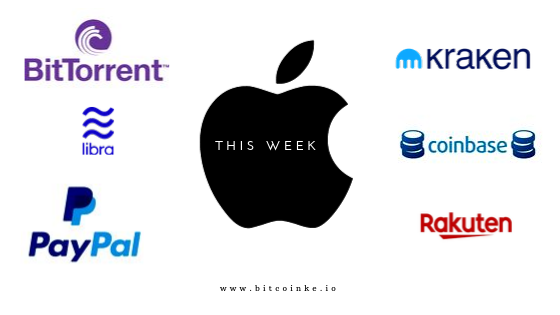 This week has been particularly interesting as talk around self-regulation to ensure compliance and trust in the space is established. More talk around stablecoins issuance has also taken center stage among tech giants.

Apple CEO, Tim Cook, this week spoke out and said the company is not looking to launch a cryptocurrency. In an interview, Cook said that money must remain in the hands of states and no private entity needs to seek to gain power that way. The statement has been seen as a dig at Facebook which is developing its stablecoin payments project, Libra.

Related to this, after weeks and months of speculation, PayPal officially withdrew from the Libra Association this week due, in part, to the regulatory backlash Libra has received from regulators across the world. PayPal however said it remains supportive of Libra’s aspirations and looks forward to working together in other ways in the future. Speculation abounds that Visa and MasterCard are also considering withdrawing from the project. We might just have to wait and see if this happens.

There was also some interesting news from the Far East as six major Japanese brokerage firms that included SBI Securities and Rakuten Securities officially established a Japan Security Token Offering (STO) Association. The new association, which will be headquartered in Tokyo, Japan, is expected to support the development of STO fundraising by consolidating expertise in the industry, ensuring compliance with laws and protecting investors. The general incorporated association will be mainly collaborating on the development of self-regulations for STOs.

Self-regulation is also a hot topic in the West this week as CoinBase and Kraken, some of the biggest crypto exchanges in mainland USA, teamed up to launch a Crypto Ratings Council. The council will be publishing online ratings for digital assets on a scale of 1 to 5 with the highest score considered a security that cannot be issued, sold, or traded by unregulated firms. The council aims to show the regulator the exchange’s efforts to self regulate on the issue of whether a certain token is a security or not.

Introducing Buy with PayPal on MetaMask