Bitcoin Wallets with Atleast 0.1 BTC Hit the 3 Million Milestone as the 2020 Bitcoin Halving Gets Closer 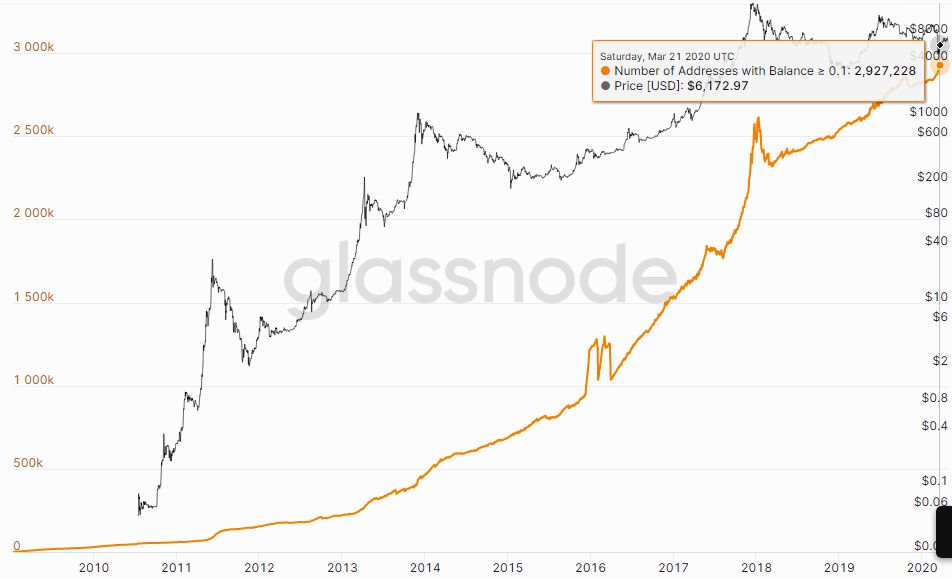 The number of Bitcoin addresses holding at least 0.1 BTC and above have surpassed 3 million for the first time ever just days before the 2020 Bitcoin halving takes place.

As global markets continue to see massive uncertainty and instability – and traditional “safe haven” assets such as oil plummet in price – it seems like BTC is becoming a more attractive asset.

SEE ALSO: Less Than 20 Days to Go Before the Next 2020 Bitcoin Halving

The number of bitcoin addresses with atleast one bitcoin has also similarly and significantly grown as the graph below shows: According to analysts though, the upcoming 2020 bitcoin halving is already priced in and will not significantly affect the price. However, there are those who believe that markets are irrational and market dynamics will apply and push the prices higher.

The above analysis is supported by one of the main tenets of financial economics theory — the efficient markets hypothesis – which suggests that all the known information is already priced in.

According to one Bloomberg analyst with decades of experience as a commodities trader:

“The stock market had its biggest correction since the Great Depression, down 15 percent. I view that as quite significant that Bitcoin is weathering this storm yet. And the key thing I find about it, it’s never stopped trading, never stopped, never halted, didn’t have a third party guiding it.

I view that as someone who’s been trading commodities my whole life as very impressive.”

To many analysts, this is seen as an attempt by the general public to hedge their savings against the devaluation of fiat currencies.

EXPLAINER: What is Smart Contract Auditing and Why Should You Demand for One?