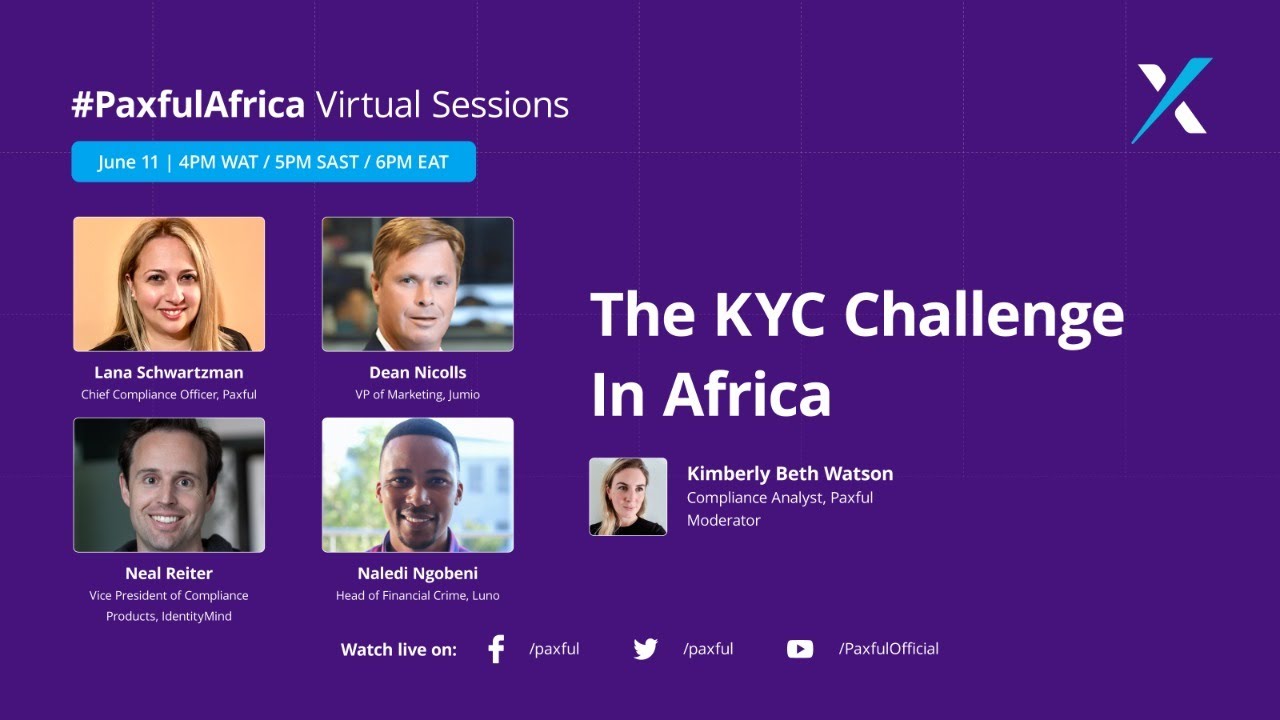 Know Your Customer (KYC) has been a big challenge for crypto companies in Africa. In this virtual session, experts from Paxful, Luno, and Jumio discuss how they overcome these challenges and offer solutions on how to improve the entire process.

A recurring problem in the discussion was a lack of a clear definition of what exactly is KYC. As a result, different jurisdictions on the continent have adopted different approaches in this regard.

Common KYC challenges in Africa highlighted by luno and PaPaxful include:

How to do KYC in Africa using technology in Africa:

FATF has not defined what exactly is proof-of-address and most African countries have simply adopted these standards from the 70s.

While KYC was, in the beginning, frowned upon in the crypto space, it is now becoming more acceptable, and in some cases preferred, with less friction in this regard.

According to Dean of Jumio, a company that offers KYC to 8 out of the 10 largest crypto companies globally:

“There used to be this feeling that KYC is a necessary evil. I don’t think it is viewed that way anymore. Many of the largest exchanges want to have an air or legitimacy about what they’re doing and this gives them that legitimacy, that they are playing by the same rules as the banks, and I think it is changing for the better.”

Here is a curated list of comments from the discussion:

"We have not contextualized what KYC is. This is done when the customer interacts with the financial system." ~ Naledi Ngumbeni, Head of Financial Crime, @lunomoney https://t.co/Z8FIlLh1IV #PaxfulAfrica #Africa #BitcoinKE pic.twitter.com/pBojY00fAS

By requesting for a selfie, we get a sense of whether the address exists in the real world and this is a challenge in some countries in Africa. Utility bills also help as proof of address.” ~ Dean of Jumio

“Using a combination of the above methods helps to offer a layering to establish risks.” ~ Dean of Jumio

“You have a national ID card but you cannot validate it against anything. It is not matured enough to take it independently since you cannot speak to the national identity system. e-KYC is something very very fundamental to look at in the continent.” ~ Naledi

Some of the key reasons mentioned why e-KYC is the most favorable approach to identity on the continent include:

The move towards e-KYC is definitely the future. However, according to Neal, it will take a significant amount of time and effort from financial institutions as they push regulation to change to accommodate this.

"e-KYC is going to happen slowly and will take a significant amount of time in Africa. No one is better than the banks to get regulation changed." ~ Neal Reiter, VP of Compliance Products, @IdentityMind https://t.co/Z8FIlLh1IV #PaxfulAfrica #Africa @paxful pic.twitter.com/GssbBmzp5j

Interestingly, Dean highlighted the notion of regulatory sandboxes as key to getting central banks, financial institutions, and fintechs working together to shape regulation. He mentioned that this would be key to push and drive e-KYC faster.

"Where we see quicker adoption of e-KYC is when you have a co-ordination of the banks, central banks, and fintechs in what they call regulatory sandboxes." ~ Dean Nicolls, VP of Marketing, @Jumio https://t.co/Z8FIlLh1IV #PaxfulAfrica #Africa @Paxful pic.twitter.com/94DBj8f8Cp

[WATCH] Our Position on Cryptocurrencies in 2022 Has Not Changed, Says Governor, Central Bank of Kenya

The future of KYC was also highlighted with a focus on Africa. Some of the trends mentioned include:

However, caution on sophisticated fraud mechanisms was highlighted as a key challenge in the space.

According to the experts industry collaboration which allows conversations with the right people and at the right time, will be helpful to ensure all satisfy all the regulators and move KYC to the next level.

Rather than blanket all of Africa with the same rules, Paxful and Luno believe KYC should take a risk-based approach, which essentially does not deviate from the regulatory framework, but allows more people get onto the financial system.

All in all, it was encouraging to hear the interest in KYC and the positive direction experts hope to see KYC take shape in the next 5-10 years.