AfCFTA Could Boost Regional Income by $450 Billion and Pull Millions Out of Extreme Poverty in Africa, Says a July 2020 World Bank Report 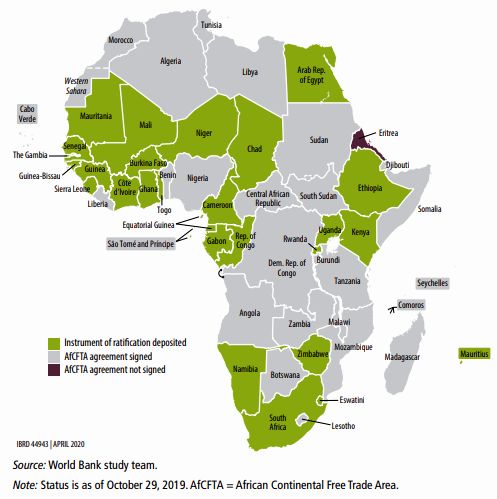 A new report by the World Bank on the African Continental Free Trade Area (AfCFTA) has said that if the agreement is implemented fully, AfCFTA could boost regional income by 7% or $450 billion, and lift millions of Africans out of poverty by 2035.

According to the report, achieving these gains after the economic damage caused by Covid-19 pandemic, totalling up to $79 billion in output losses in Africa in 2020, is critical.

SEE ALSO: The Implementation of the AfCFTA Postponed Due to COVID-19 Pandemic

The report shows that the most gains will come from measures intended to cut red tape and simplofy customs procedures, tariff liberalization, lower trade compliance costs, and ease of African businesses integrating into global supply chains.

According to the report, the agreement would reshape markets and economies across the region, leading to the creation of new industries and the expansion of key sectors. Overall economic gains would vary, with the largest gains going to countries that currently have high trade costs.

“AfCFTA would signifi cantly boost African trade, particularly intraregional trade in manufacturing. By 2035, the volume of total exports would increase by almost 29 percent relative to business as usual. Intracontinental exports would increase by more than 81 percent, while exports to non-African countries would rise by 19 percent. This would create new opportunities for African manufacturers and workers.

This report is designed to guide policy makers as they continue the process of negotiating and implementing the agreement. Creating a continent-wide market will require a determined effort to reduce all trade costs. This will require legislation to enable goods, capital, and information to flow freely and easily across the African borders.”

The World Bank believes that if the agreement is implemented, it will make Africa as competitive as any other region in the world.

Looking at the charts below gives a good indication of the value to be gained when AfCFTA is fully implemented.

Constraints to African trade is largely attributable to the high costs of that trade. As a result, the biggest gains would come from the reduction in non-tariff barriers and the implementation of the Trade Facilitation Act (TFA) The report reveals that implementation of AfCFTA will be a significant challenge. While lowering and eliminating tariffs will be relatively easy, enacting the non-tariff and trade facilitation measures however will be the hard part.

Substantial policy reforms at the national level will be required before achieving AfCFTA’s full potential.

While Africa accounts for less than 3% of global trade and GDP, 16.7% of the global population live on the African continent. Making the AfCFTA work will, not only be a big boost to the economies of Africa, but also on the global trade.

Check out the full report here.