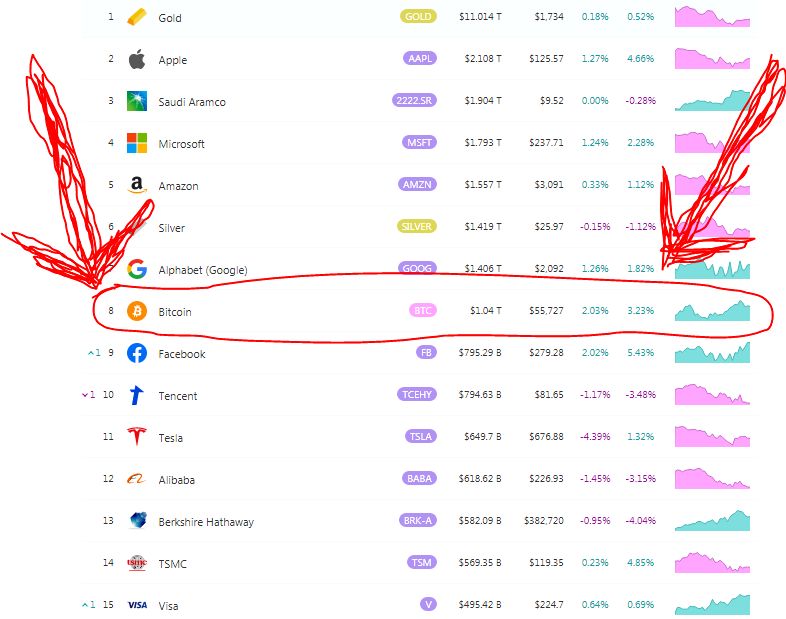 As of this week, Bitcoin is now ranked the 8th most valuable asset after crossing the $1.1 trillion market cap bypassing Facebook’s valuation and right below Google’s current marketcap.

At the same time, bitcoin has bypassed the valuation of the 3 of the world’s biggest banks combined.

A look at the marketcap listing reveals that bitcoin is also one of the fastest growing asset classes among the top 10 putting it in a much better position to continue climbing up the list rankings.

As of this writing, bitcoin marketcap is roughly $1.15 trillion, which also puts its valuation way above the combined marketcap of:

The combined marketcap of the above financial institutions stands at roughly $1.08 trillion.

Looking at it from another perspective, the combined marketcap of the biggest payment networks, MasterCard and Visa, at $871 billion, is again significantly less than bitcoin.

Looking at the grand scheme of things, what would it take for bitcoin to be the ultimate asset above all else?

With the gold marketcap, the most valuable asset of all time, now at $11 trillion, bitcoin would need to trade at $590, 000 to the dollar (BTC / USD) to achieve this level of status.

Bitcoin would also only need to trade at $109, 000 to the dollar to get larger than Apple.

This is not farfetched when you consider that bitcoin’s marketcap is:

RECOMMENDED READING: Bitcoin Breaks the $1 Trillion Market Cap Milestone After More than 900% Growth in Less than One Year