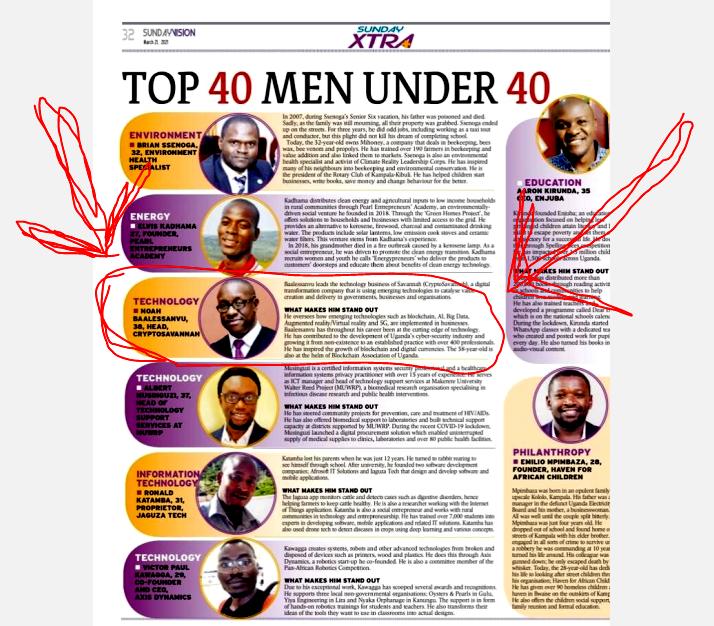 Uganda’s technology business leader at CryptoSavannah, Noah Baalessanvu, has been recognized among the top 40 under 40 men in Uganda.

Noah, who is a cyber-security expert, is also at the helm of the Blockchain Association of Uganda, one of the leading organizations spearheading blockchain adoption on the continent.

Below is a breakdown of the ‘Top 40 Men Under 40’ list in Uganda and their fields of expertise:

A telecommunications graduate from Makerere, Noah got introduced into computing at an early age and has worked extensively in the telecommunications, cybersecurity, and computer forensics space consulting for both private and public entities in Uganda.

Noah is also the current chair of the National Information Advisory Group, the body responsible for critical infrastructure protection in terms of cyber security for the country.

“I got introduced to crypto back in 2011 / 2012. At that time, I had a dream of setting up an exchange to be able to give Ugandans access to bitcoin.

A couple of years later, we built Uganda’s first bitcoin exchange, Binusu, in 2016, which still runs till today. We would then found a company called Blockchain Technologies Africa which eventually became CryptoSavannah.

Talking about the future of blockchain and its potential, Noah added:

My view is that cryptocurrencies are soon going to become mainstream and stop being headline news. Traditional finance is going to imitate crypto.

Here in Africa we have less to loose by embracing new technologies since our legacy systems are still not as distributed.

We now have that ability to leapfrog and this technology gives us the tools that allow us to embrace the new future of finance.”

Here is a chat with the Chairman, Blockchain Association of Uganda, after a successful 2019 African Blockchain Conference: