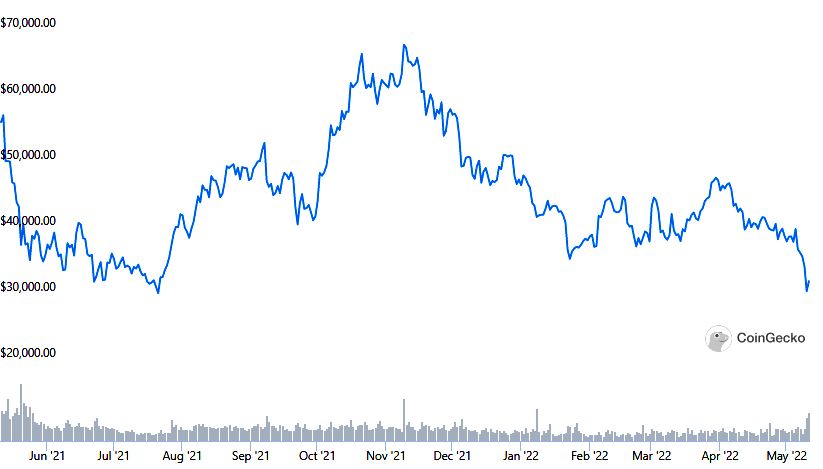 However, both crypto equity markets have experienced a drawdown over the last seven days as investors were spooked by macro events. As reported by CNBC, Stocks have been on a steady decline since May 5, 2022 when the Dow Jones Industrial Average and Nasdaq Composite each posted their worst single-day drops since 2020.

SEE ALSO: Are Bitcoin and ETH Too Volatile? Netflix shows its ‘FAANGS’ and Makes them Look Friendly

Last week, central banks around the world, including the US, UK and Australia, raised interest rates as they attempt to tackle rising prices. This came as the US Federal Reserve raised its key lending rate by half a percentage point, marking its biggest rate hike in more than 20 years.

On the other hand, the recent volatility in crypto markets saw Terra, the ecosystem behind algorithmic stablecoin $UST, draw a lot of heat as its $UST stablecoin dropped its peg wildly in the previous 24 hours.

TerraUSD, or $UST, sank below 70 cents for the first time on May 9, 2022, as holders continued to flee the token in what some have described as a ‘bank run.’ The token fell as low as 62 cents before regaining ground to trade at 90 cents Tuesday, according to Coinbase data.

Adding to the the pressure on bitcoin price over the last 24 hours was LUNA Foundation Guard’s (LFG) decision over the weekend to offload about $750 million from its $4 billion BTC reserves due to uncertain macro conditions across the market. The foundation labelled the sale as a ‘loan’ to OTC traders to protect the $UST peg.

Within the last 4 days LFG would buy an additional $1.5 billion worth of bitcoin to shore up its stablecoin – surpassing Tesla to become the second holder of bitcoin after Microstrategy. It is still some ways from its peg at about 80 cents (0.81).