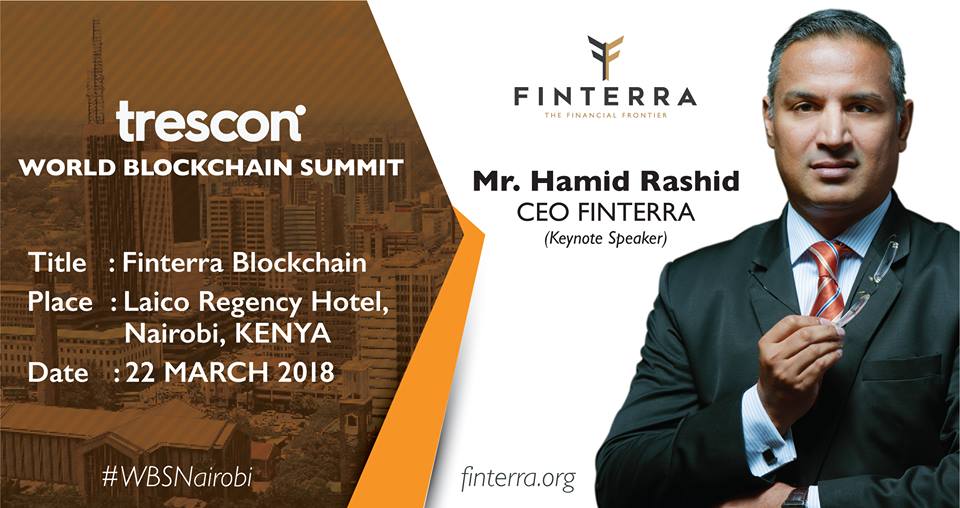 At the World Blockchain Summit Nairobi 2018, we were introduced to a new type of blockchain that seeks to solve the problem of financial assets especially in unknown financial terrains.

The CEO of Finterra, Hamid Rashid, was on stage to discuss this new proposed blockchain that seeks to bring a new approach to finance. The goal is to bring order to the financial world. As users and regulators, the Blockchain is still relatively new and most of us continue to learn what it’s all about. In different countries, Blockchain is described differently.

In order to bring a social element into the space, the current blockchains do not address this aspect. Despite the thousands of blockchain projects being developed, very few have a social element into them. The problem with current blockchains however is the technical knowhow that currently rides on the hype. Eventually, like the early Internet, the hype will die out once the technology reaches maturity and real use cases will start to emerge.

The Problem Statement and Disruption

According to the World Bank section of Islamic Equity Liquidity Fund Division, there’s a recurring challenge of liquidity of certain lands. These lands under the Islamic Waqf law cannot be developed as a result. The lands in question have been given out to charity in perpetuity making them permanently unavailable for sale or use as collateral by banks and other financial institutions, including governments.

These Endowment Assets locked under the Waqf Islamic Law are in trillions of dollars. Since the law is largely universal, these lands can be found all around the globe and all operate under same law and regulations.

The disruption in the space then comes from land ownership. The challenge however is that these assets cannot be easily liquidated. For example, Taj Mahal is under the Waqf, endowed over 400 years ago. The income generated from it must go to charity. The same case is replicated globally.

Due to the above challenges, these lands cannot be developed.

Finterra is looking to change capital raise for the development of such land assets using blockchain. The idea is to create a future blockchain that never existed to solve this challenge.

The big difference with the Finterra blockchain is that it will include compliance and regulation especially the Islamic compliance built into it to cater to this need. According to the CEO, this blockchain will be more superior to Ethereum and other current blockchains.

According to Hamid, the blockchain will simply be an enabler to help run the Endowment chain that will help free up capital for the development of endowed lands. The company has already patented and copyrighted a few of these innovations and looking to launch soon.

The company has also hired consultants to develop the model and framework for this blockchain. The technical team is composed of seasoned guys either from Ripple or NEEM. The blockchain will be going live in June.

Endowment lands are largely run by NGOs like Red Cross and the like.  These organizations cannot sell or lease out such lands. All they can do is to use them to generate revenue which goes out to charity. In order to develop these lands, these NGOs will reach out to Finterra to help in raising capital.

The global community will then look at the project and back up the project. Funds go to a licensed fund manager, like a bank, who manages the money. As the project develops, token holders earn revenue in dividends while some of the money goes back to charity.

Finterra’s business model is simple – earn from the use of the platform by endowment and charity boards and not from the development projects.

Finterra is an early mover in the space and we can expect to see more players come in eventually. By developing a social blockchain that integrates regulatory and compliance into the system, investors can be assured that their investments will be used according to their wish and direction and in strict compliance to the law.

At BitcoinKE, we shall be monitoring the project as we move along and will provide updates on the same.