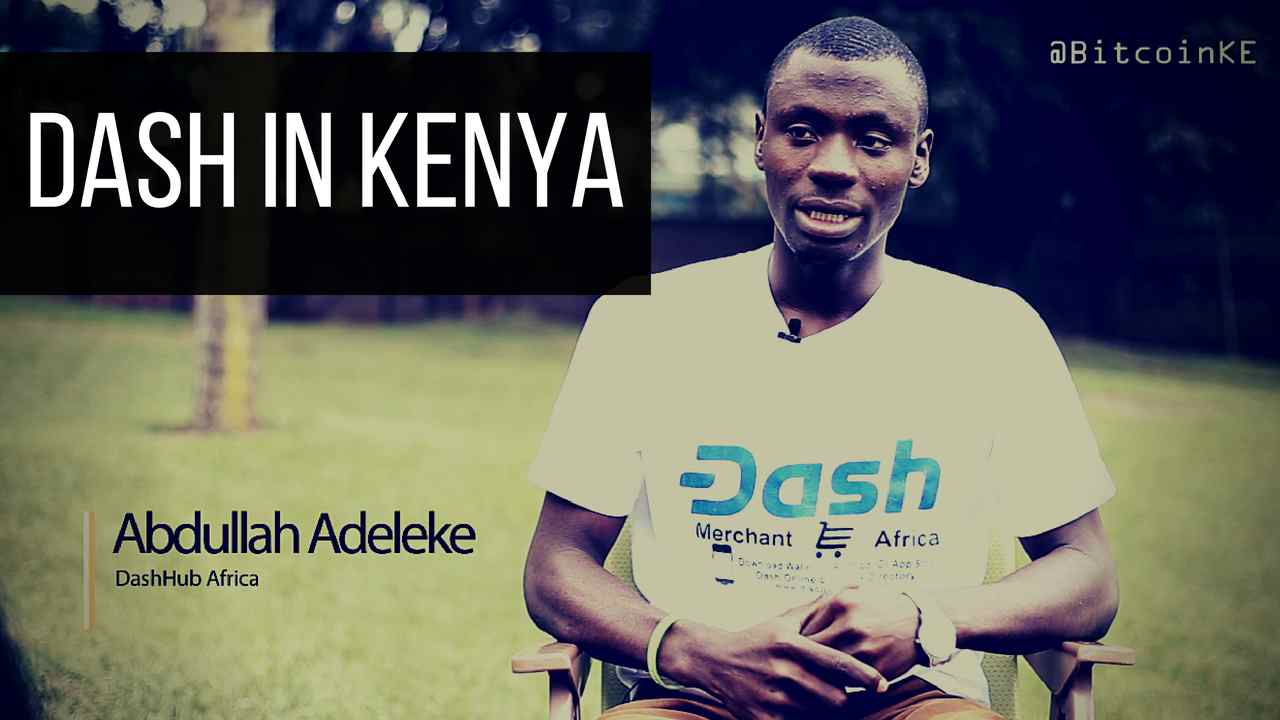 Dash Hub Africa, a project sponsored by Dash’s decentralized autonomous organisation (DAO), is set to establish a dash ecosystem in Kenya and eventually in the East African region according to the project’s coordinator, Abdullah Adeleke.

The project aims to increase adoption and awareness of Dash in Africa where merchants, businesses, and consumers can use the cryptocurrency on a day-to-day basis.

Dash Hub Africa wants to introduce the cryptocurrency to businesses and merchants in Kenya and the East African region so that consumers can use it to pay for goods and services.

While in Nairobi, Adeleke met with Bitcoin enthusiasts to create a dash community in Kenya. Dash Hub Africa has already held some training sessions with merchants already accepting bitcoin payments such as Betty of Nyeri and Boxlight Electronics of Luthuli Avenue, Nairobi, Kenya. Dash Hub Africa will further train on how to work and get paid in Dash and how to create a dash ecosystem where the crypto is used every day.

Dash Hub Africa is in 17 African countries including Nigeria, Kenya, Ghana, and Togo. It also has nine ambassadors that are spearheading the dash evolution on the continent.

Dash, the portmanteau of digital cash, is an open-source peer-to-peer (P2P) cryptocurrency once known as Darkcoin and XCoin. The cryptocurrency was released in 2014.

Similar to other cryptocurrencies such as bitcoin, Dash is based on blockchain technology.

The blockchain is a DECENTRALIZED digital ledger technology that records and transfers data in a transparent, fast, and secure way.

Evan Duffield, the creator of Dash, drew inspiration from the fact that bitcoin is not anonymous enough.

“I discovered Bitcoin in mid-2010 and was obsessed ever since. After a couple of years in 2012, I started really thinking about how to add anonymity to Bitcoin,” Duffield said. “I came up with maybe ten ways of doing this, but I soon realized that Bitcoin would never add my code. The developers really want the core protocol to stay the same for the most part and everything else to be implemented on the top of it.”

Dash stands out because it is privacy-oriented, making it one of the most anonymous cryptocurrencies in the world.

Another main characteristic of Dash is its instant transactions. Dash utilizes a protocol called InstantX which sends transactions almost instantaneously within the network.

Compared to fiat currencies, Dash provides the freedom, transaction speed, trust, and control people wish they had with their money. Dash can be stored on mobile, web, exchange, and hardware wallets.

Unlike Bitcoin, Dash has a two-tier network where miners power one tier and master-nodes power the other. Master-nodes enable PrivateSend (financial privacy), InstantSend, and the decentralized governance and budget system. The master-node system is, therefore, known as the Proof of Service (PoSe) because it offers important services to the network.

Master-nodes are also responsible for voting on the network. Currently, there are 4,670 master-nodes and more than 2,000 active master-nodes on the Dash network, according to Adeleke.

To set up a Dash masternode, you need to own 1000 Dash. Furthermore, you can decide to set up and maintain your own hosting solution or you can use hosting providers such as masternode.me or Node40.

[IN PICTURES] The Celo Africa Web3 Fund Inaugural Event Kicks Off in Kenya – Next Stop, Nigeria

Miners, on the other hand, are in charge of the sending and receiving of funds and they also prohibit double spending.

Presently, Dash price stands at $254 while its market cap is $2 billion.

The Future Plans for Dash

Dash plans to launch a light wallet called Evolution later this year. The aim of the wallet will be to make dash easy to use and access for all users including those that are not technology savvy. That means that users who do not know what cryptocurrencies are can use the wallet with ease.

Evolution will allow users to create a wallet or start selling as a merchant. Additionally, users will be able to create different accounts such as joint and cash accounts. Other features include access to merchant apps, moderation in case of disputes between customers and merchants, and the ability to send private messages.

Dash is focused on making the crypto a day-to-day currency with the ability to replace fiat money.

Adeleke explains: “Dash wants to make merchant payment solutions easy, viable, and cheap. Dash is also keen on entering the remittance market in Africa and transforming lives. When you create impact in life, you build an ecosystem where you build a community collectively together.”

As the adoption of the blockchain in Africa continues to grow, Adeleke envisions a future where the continent’s growth will be dependent on the technology.

He was also impressed by the active and vibrant blockchain community in Kenya, more specifically what EOS Nairobi and BitcoinKE are doing in the space to grow the ecosystem and bring more awareness about cryptocurrencies and blockchain in the region.

“The future for blockchain in Africa is great. We have a vast market that can absorb the technology and help Africa build a more class economy thanks to freedom, decentralization, and access to information,” he states.