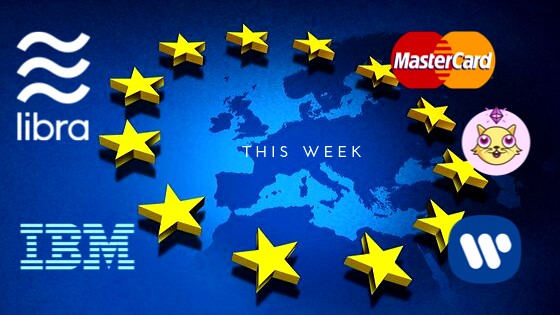 This week in crypto has interesting developments from a number of European countries pushing for resistance against Libra cryptocurrency to a number of blockchain startups raising funding to build solutions.

A number of European countries, most notably France and Germany, are pushing the European Union members to reject Libra cryptocurrency from operating in European soil. This comes after the Libra Association announced that the Libra crypto will be launching in the second half of 2020. On the other hand, Switzerland is open to having Libra operate under regulation. Interestingly, France also announced that it will not tax crypto-only trades, but will instead tax crypto-fiat trades.

It was also good news for the entertainment industry when it was revealed that Warner Music would be collaborating with Dapper Labs, the company behind CryptoKitties, to create a new blockchain called Flow. Flow is especially designed for “composability” where one developer can use code from one application in a wholly other one. Additionally, Warner Music is reportedly looking into how cryptocurrency could be used to enable a new method for tipping artists on the network and testing two different blockchain platforms for directly connecting musicians with their fans without the need of intermediary distributors.

Cross-border payments are about to see a major revolution as well with Mastercard announcing it has partnered with blockchain firm, R3, to develop a cross-border payment solution. The two firms inked a deal to “develop and pilot” the payments solution which will initially be aimed at connecting faster payments schemes and banks backed by Mastercard’s clearing and settlement network. The platform will be built on Corda Enterprise, the commercial version of the platform, as opposed to the open-source Corda Network.

There was concerning news this week when IBM doubled the number of its employees on the technical steering committee (TSC) of Hyperledger which is responsible for creating working groups to focus on technical issues, approving projects, and reviewing updates. Tech giant’s influence on the enterprise blockchain consortium. To stoke the fire further, the Hyperledger TSC elected another IBM official as its chair amid controversy over the tech giant’s increased representation on the panel. At stake is the direction of one of the three most widely adopted enterprise blockchain platforms, the others being R3’s Corda and variants of the ethereum blockchain.

Exchange news were also not lacking this week with United States-based cryptocurrency exchange Coinbase indicating it was considering the launch of an initial exchange offering (IEO) platform. Coinbase said it is looking at both the IEO and STOs space. CoinBase is in the process of becoming a fully regulated broker-dealer under the supervision of the U.S. Securities and Exchange Commission (SEC). Broker-dealer licenses have been obtained by Coinbase, but they’re “still digesting” the acquisition and “repurposing” the respective licenses. This means the platform will soon be capable of offering fully compliant blockchain-based securities.

Sign Up for our upcoming meetup featuring the global crypto exchange, OKEX, on September 21st, 2019 in Nairobi, Kenya.