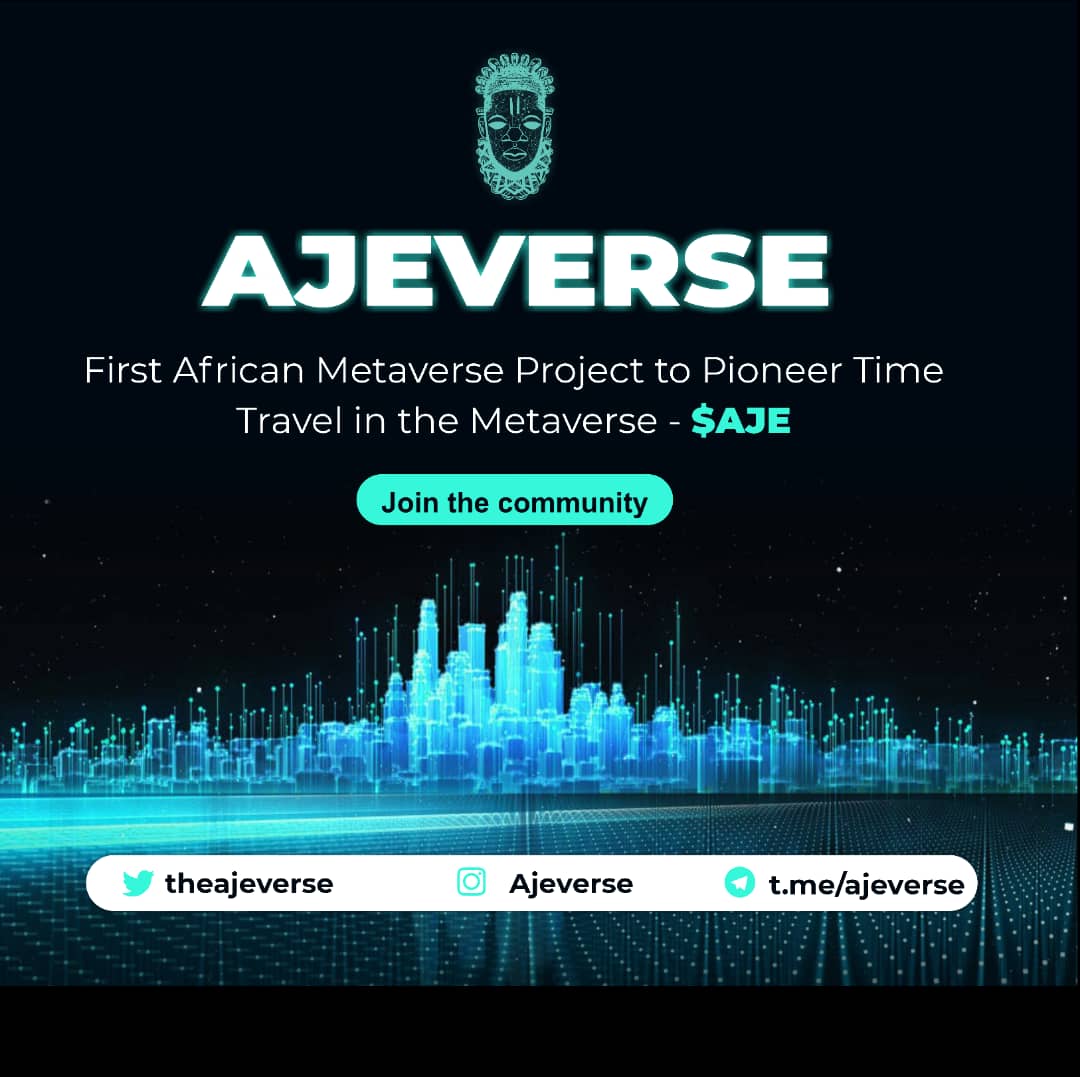 AjeVerse is an AFRICAN Community-Driven Meme Token that seeks to position Africa as a leading player in the Metaverse and NFT revolution.

Since Mark’s announcement of Facebook’s rebrand to META, the Metaverse has become the single most searched and talked about technology.

But what is the METAVERSE?

The METAVERSE is the next frontier in the evolution of the INTERNET.

It is a vision of what the future could be, a digital world where you could lead a digital life without leaving your home, thanks to your avatar, and where the real and virtual worlds would eventually merge (work, go out, consume, study, meet with your relatives etc).

The metaverse represents the sum of all the processes and protocols that power the internet and the emerging Web3, and are coalescing into a central and interoperable space. In this future realm, communications, finances, game worlds, personal profiles, NFTs, and more are all part of a larger online experience.

If the contemporary internet experience is two- dimensional—meaning you browse and scroll through it on a screen —the metaverse is 3D. You’ll be “walking” through it via connected headsets or glasses.

An African blockchain-based startup is set to pioneer a unique utility in the Metaverse space and position Africa as a leading player in this new Technological evolution.

According to the project’s White Paper;

“Our metaverse will pioneer TIME TRAVEL in the metaverse, in delivering a story driven experience that unfolds during your trip.

Time travel is no longer just thing of dreams or something you watch in the movies; we now have the technology and expertise to take you to any place and moment in history.

Life is all about stories and human experiences, so imagine not only being able to immerse yourself into a time in history or in the future and take in the sights and the sounds, but also to witness these remarkable moments as they play out.”

AJE is Decentralized Metaverse built on the Binance Smart Chain (BSC) that allows users to create, explore and trade in Africa’s first-ever virtual world owned by its users and holders of its native token ($AJE) with NFTs you can own, trade or transfer.

The Afriverse will act as a bridge between the physical and virtual worlds within a decentralized and open-source virtual world. It will deploy cryptographic protocols to manage digital value, for example, digital art, real estate & advertising space within the Metaverse.

Meme Tokens are a new form of interest, status, participation, and value on a global scale. They are cultural currencies that attach measurable and transferable value to all sociocreative activity.

The Native Utility Token $AJE will act as the connective medium and means of access to our Metaverse.

Another unique feature of the project is their Community owned decision making framework. The Ajeverse will be a DAO Governance platform, which means ownership of the marketplace and metaverse will be distributed to HOLDERS according to Voting rights, continually adding value to the network.

5% of Total Supply to Victims of #ENDSARS

Tens of thousands of young Nigerians took to the streets to protest against police brutality after a video went viral of a man allegedly being killed by the notorious Special AntiRobbery Squad (SARS), sparking what became known as the #EndSARS demonstrations.

When the movement took off, activist groups like the Feminist Coalition had used cryptocurrency donations to raise money for the protests after their accounts were blocked by the central bank and this is where the synergy is.

CRYPTO empowered millions of young people when their governments failed them and for this, the start up has decided to commit 5% of its Token Total Supply to a Charity Fund managed by their Community of Holders to aid victims and close relations of Victims of the #EndSars Movement.

It will also extend this fund to female victims in major war-torn countries such as Sudan, Iraq, Democratic Republic of Congo, Sierra Leone, Kosovo, and Bosnia and Herzegovina amongst others. The 5% Allocation will be vested and released on monthly trenches for 36 Months to support various communities that fall within the beneficiary demographics.

RECOMMENDED READING: Bitcoin Donations Are Among the Most Popular Payment Modes for Supporting The Nigerian #ENDSARS Campaign