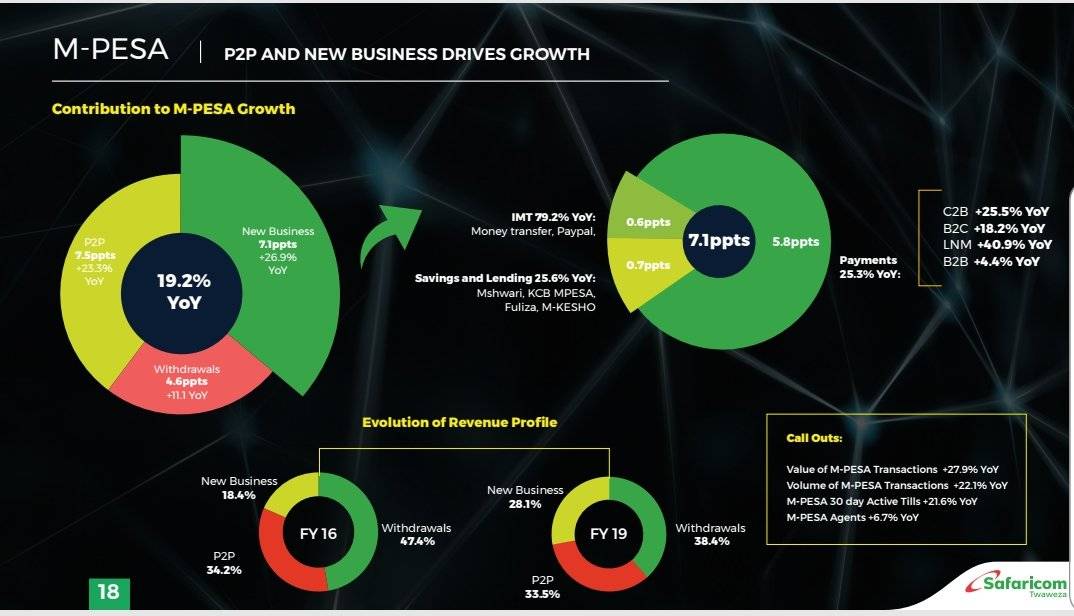 Safaricom has announced audited results for the year ended 31st March 2019 with M-PESA revenue up by 19.2% to Ksh. 74.99 Billion. Person-to-person transactions, and new business contributed largely to M-Pesa’s growth.

The new business that Safaricom referred to here include payments, saving and lending services such as Mshwari and Fuliza, and M-Pesa Global services like Paypal and money transfer services.

Payments had the biggest growth with Customer-to-Business payments having a 25.5% growth year on year.

.@sateeshkamath Last year we called out a shift in our business model, where new use cases would slow down the growth in withdrawals. This trend has continued this year where usage continues to grow, while withdrawal revenue growth has stabilized. #SafaricomFYResults pic.twitter.com/udj7XSQAXx

“M-PESA has performed strongly this year, growing at 19.2% YoY. This growth has been driven by an increased number of users, higher velocity of funds within the ecosystem and adoption of new use cases.” #SafaricomFYResults

.@sateeshkamath We added 2.3 million customers this year to the Safaricom family, a 58% increase compared to the 1.4 million added the previous year. #SafaricomFYResults pic.twitter.com/0GNiD2DUJN

Below are the highlights of the Safaricom 2019 FY results announcement: