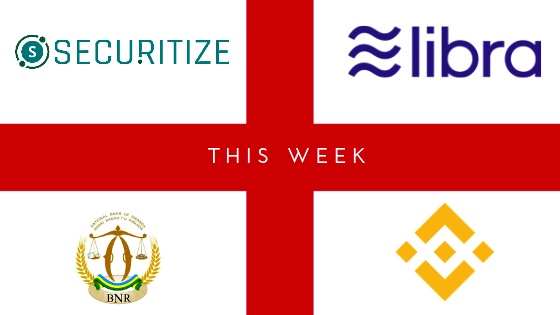 This week has seen interesting developments around the globe on crypto projects and governments interest in the digital assets space.

The Libra Project seems to be facing more challenges beyond government regulations. It was reported that two out of the 28 entities that signed up for the project are getting nervous  about the project. Facebook is also worried since it seems to be the only company putting its neck out. The companies are apparently getting worried about attracting attention of agencies by publicly supporting Libra.

On a more positive note, the SEC has approved Securitize, a blockchain tech startup for issuing tokens, as an official keeper of records about securities change ownership. The startup will use smart contracts to keep a record of transfers becoming the first SEC-registered transfer agent with a blockchain protocol to do that.

Binance, the largest cryptocurrency exchange by volume, announced this week that it is launching a new blockchain, dubbed Venus, and described it as ‘an initiative to develop localized stablecoins and digital assets pegged to fiat currencies across the globe.” The exchange is seeking to work with governments, corporations, and technology firms to develop a plethora of stablecoins around the globe.

The Central Bank of Rwanda is reportedly studying the development and issuance of its own digital currency. There are still concerns over how exactly the entire currency will be converted into digital form and how the technology will work. However, officials at the moment are looking at how this can be done and they will join once they are ready.

The biggest news of the week however is on the comments of Mark Carney, the Governor, Bank of England, when he challenged the dollar’s position as the world’s reserve currency arguing that it could be replaced by a global digital currency. Carney was confident that a digital currency would unlock dollar funds for governments that hoard the U.S. dollar as insurance policy and reduce the effects of economic swings originating in mainland U.S.A.