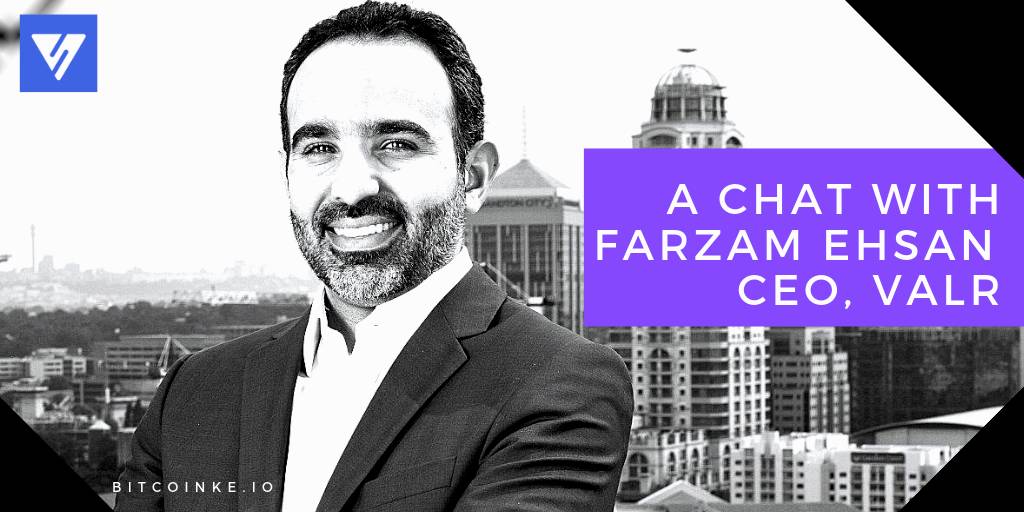 VALR, the Johannesburg-based trading platform, recently closed a $1.5M funding led by Bittrex. The exchange has launched with crypto-to-crypto trading and will launch fiat-to-crypto trading in two months time in South Africa with expansion plans across Africa.

BitcoinKE had a chat with the the CEO of VALR, Farzam Ehsani, the man behind the company’s vision, on his early beginnings, the state of crypto in South Africa, closing the Bittrex funding, and his thoughts on the future of crypto in Africa.

You’d be surprised to learn that Farzam grew up in Westlands, Nairobi, Kenya and is pretty familiar with the Kenyan landscape. In 2006, he went to South Africa to work for McKinsey after having studied in the United States.

He first heard of Bitcoin back in 2012. His initial thoughts was that it was a scam but he quickly learned that this was a truly evolutionary technology.

In 2016, he became the blockchain and cryptocurrency lead for Rand Merchant Bank in South Africa, a position he held for two and half years.

Growing the Ecosystem in South Africa

Farzam continued to be a great influence in the space. While at Rand Merchant Bank, he helped put together a blockchain consortium in South Africa with financial institutions. These institutions accounted for about 98% of all financial transactions in the country.

Being so much involved in the space, he realized that a lack of regulation and understanding of the crypto industry was holding the industry growth back.

The need for a crypto-fiat exchange in the space was also needed.

Farzam began building the VALR trading platform in 2018 and in mid-May of the same year, he got an initial investment from a South African investor. The total initial round investment totaled $1.55M.

According to Farzam, the most difficult part of building an exchange is liquidity. As a result, the goal was to ensure the exchange would have the needed liquidity to make it successful, and the Bittrex deal will help provide the needed liquidity on the back channel. This will ensure VALR remains one of the most liquid and active exchanges on the continent.

“We have the largest cryptocurrency offering on the continent.  The plan is to provide fiat on and off-ramps starting with South Africa, Kenya, Nigeria and other places.” Said Farzam. The exchange is already live and looking to provide Rand on-ramps starting with South Africa in two months time. The company hopes to offer fiat on-ramps for Kenya, Nigeria, and other places in the coming months.

While speaking to BitcoinKE, VALR had a total of about 2, 000 customers on the platform, which launched on March 1, 2019, just two weeks since launch.

Currently, VALR has team of 6 full-time employees with about 20 in total.

The platform has both a take and maker fee. Taker fee is 0.75% and the Maker fee is -0.1%. This means the makers get paid 0.1% of the fee transacted. Think of it as a rebate. Any trade has a buyer (taker) and a seller (maker). The maker fee is gotten from the 0.75% taker fee leaving Valr with 0.65%. This makes the platform sustainable.

The platform also includes a referral program which gives a referrer 15% discount of the fee. If you refer 2 or more people, you get the 15% and 10% of the fees of all referrals.

VALR is one of the simplest platforms to use, according to Farzam. As a result, it is bound to be successful.

The success in building VALR has also been brought on by their close relationship with regulators in South Africa. Farzam frequently shares his views on how regulation should look like in South Africa. He has also contributed to the regulatory paper and continues to do so.

According to Farzam, Bittrex interest in VALR and the $1.5M funding was influenced by 4 things:

When asked about his future predictions, Farzam said:

“There will probably be a consolidation of the coins that have emerged in the ecosystem, but I believe that the marketcap of the ones that survive will increase and this asset class will go from strength to strength.”

VALR is currently live and you can open an account and start trading today. The company is also offering FREE trading for all verified customers until 31 March 2019.