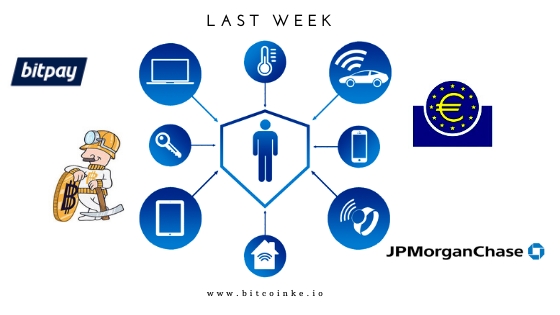 Last week saw a good number of reports and surveys in the blockchain and crypto space come out and prove the ever growing interest in crypto and blockchain. Governments and institutions continue to express their interest in the technology as they look at launch and use cases in 2020.

Last week, Christine Lagarde, the President of the European Central Bank, said that the financial institution should be ahead of the curve regarding the demand for stablecoins. In a tweet, Lagarde said that there is clearly demand out there that needs to be responded to. This statement followers her earlier statement while she was head of the IMF where she mentioned that financial institutions need to promptly adapt to the rapidly changing financial environments brought on my new technologies like digital currencies.

Payment processor, BitPay, last week announced support of additional 3 stablecoins to its list of supported tokens, namely, USD Coin, Gemini Dollar, and the Paxos Standard token. All the listed stablecoins are pegged to the U.S. dollar. According to BitPay CEO, accepting or paying with stablecoins opens up new possibilities for global businesses that require the stability of the dollar but the security and efficiency of blockchain payments. Businesses can invoice international customers without the need for costly, complicated cross-border wire transfers. Customers can send and receive payments using fast, efficient, and volatility free dollar-pegged stablecoins. Notably absent though was Tether, the stablecoin with by far the biggest trading volumes

Bloomberg last week reported that JPMorgan, the largest bank in the United States, is looking to launch its blockchain Quorum Interbank Information Network (IIN) in Japan possibly in January. The Ethereum-based blockchain. More than 80 Japanese banks have expressed intent to join the platform, which is more than 20% of the total global members of 365 that announced participation since September 2019.

A new Gartner survey released last week has shown that 75% of IoT firms want to add blockchain or are planning to adopt it by the end of 2020. The 500 U.S. companies surveyed said that increased security and trust in shared multi-party transactions are the top benefits when companies combine blockchain and IoT technologies.