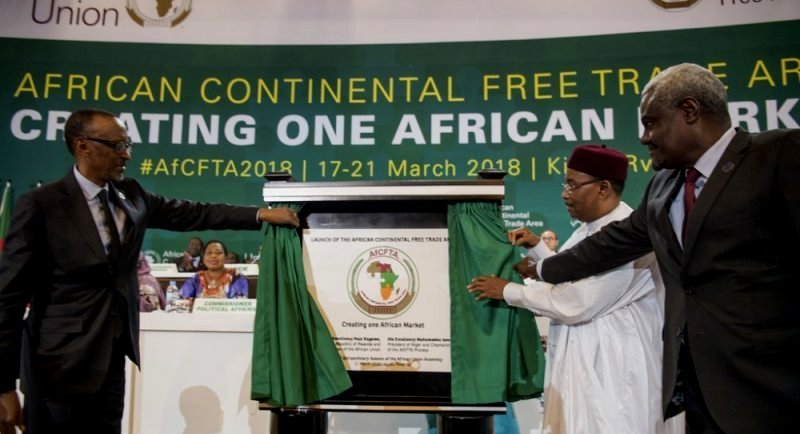 After four years of talk, the African Continental Free Trade Area (AfCFTA) agreement has come into effect and ushered in a new era in African development.

The African Trade Pact, which included 54 member states and signatories, came into effect when the African leaders met at Niger’s capital, Niamey, to sign the agreement into effect.

So far, only 27 states have ratified the agreement, Kenya being one of them. Ratification legally binds these countries by consent to the AfCFTA.

The World Bank ranks many countries in Africa among the hardest places to do business. However, the ambitious project is expected to ease trade between them is a step closer to reality.

AfCTA now becomes the largest free trade area, uniting 1.3B people, since the creation of the World Trade Organization in 1994 and is expected to unlock Africa’s potential by boosting intra-regional trade, strengthen supply chains, and spread expertise across countries.

July 7 from now on will be officially celebrated as the Day of African Integration in commemoration of today's historic operationalisation of the #AfCFTA, as we start the journey thr economic integration vision of the #AfricaWeWant pic.twitter.com/hGf0djU9X8

The agreement will see new mechanisms set up of determining the rules of origin, a digital payment system, and online toll for listing products and tariffs, and monitoring system to deal with non-trade barriers.

The Pan-African Payment and Settlement System (PAPSS), a digital payment processing platform, has already been launched to enable and accelerate the cross border and intra-regional trade and supported by the Trade Finance Bank for Africa.

Today is a historic day in #Niamey as #Afreximbank launches the Pan-African Payment and Settlement System (PAPSS), which will transform how Africa trades. What is PAPSS? What is in store? How will it impact #AfricanDevelopment?#PAPSS#AfricanTradeAccelerated
#AfCFTA#AUSummit pic.twitter.com/2ZMTy1HDEP

“The eyes of the world are turned to Africa. AfCFTA will reinforce our negotiating position on the international stage. It will represent an important step.”

The IMF has described the AfCFTA as an ‘economic game changer’ for Africa similar to what such zones have done for Europe and North America.

So far, only one country in Africa has been left to sign on the AfCFTA agreement.

Currently, Nigeria, Egypt, and South Africa account for over 50 percent of Africa’s cumulative GDP with island nations representing only 1 percent. Nigeria, the largest economy in Africa, signing the agreement was seen as a big boost.

According to Niger’s President, Mahamadou Issoufou:

“Nigeria is Africa’s biggest economy and most populous country. Without Nigeria, the free trade zone would’ve been handicapped.”

Current trading blocs stats as of 2017 are as follows:

The agreement will see the removal of trade tariffs on 90 percent of commodities and will take effect starting on July 1 2020.