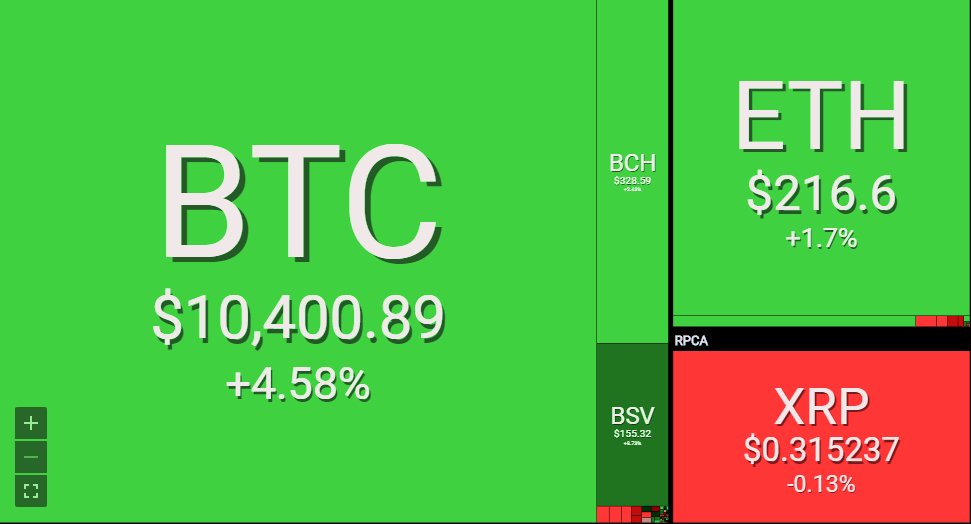 A few reasons have been attributed to this dramatic and sharp price increase:

Due to a slowing economy in the United States, the Federal Reserve has cut down interest rates by 0.25% in more than a decade. The last cut took place in the height of the 2008 global recession. According to The Guardian publication:

“Growth has slowed in the US and elsewhere around the world as the White House engages in the trade standoff with Beijing. Business investment in the US and other countries has faded as firms put spending decisions on hold.”

During the U.S. Senate Banking Committee hearing on regulatory frameworks for digital currencies and blockchain, the chairman Mike Crapo’s statement positive statements and the fact that the U.S. “couldn’t succeed” in banning Bitcoin and cryptocurrencies even if it wanted to has also been received positively by the market.

“It seems to me that these technologies and other digital innovations are inevitable. They could be beneficial… and I believe the US should lead in their development. I look forward to hearing more about the ecosystem during this hearing.”

“I’m not saying that it should, but… If the United States were to decide it didn’t want cryptocurrency to happen in the United States and tried to ban it… I’m pretty confident we couldn’t succeed in doing that because it is a global innovation.”

Recently, China has been publishing educational content on Bitcoin and cryptocurrencies which has been very well received.

The Bank of China, one of the largest state-owned commercial banks in the country, has published an infographic explaining why Bitcoin is valuable and how its value keeps increasing. The infographic breaks down the history of bitcoin, basic information, and even the fact that Facebook is developing its own cryptocurrency, Libra.

In July 2019, a court in China upheld a ruling which made Bitcoin “virtual property”, which reaffirmed the nation’s stance that it’s legal to own the cryptocurrency and that bitcoin holders are entitled to legal protection in case of disputes.

In addition, the Center for Information and Industry Development (CCID), under China’s Ministry of Industry and Information Technology, has published rankings of 37 crypto projects.

The CCID has evaluated all 37 projects based on their basic technology, applicability, and creativity. This CCID initiative, which launched in 2018, has gone through 13 iterations. The aim is to “offer governments, enterprises, and research institutes around the world a guide into crypto and blockchain” citing the lack of an independent analysis of the same.

The conversation on cryptocurrency adoption continues to spark debate around regulation globally, including in Kenya and across Africa. As a result, this affects the crypto markets.